Founded in 2001, today, almost two decades later, our new name best reflects our role in the pharmaceutical industry as an “Indications Discovery Company.”

EMBARK HEALTHCARE companies don’t discover new drugs. Instead, they discover new ways to use existing drugs for other indications and then advance those drugs into late-stage development programs for the betterment of humankind.

Drugs are essential to helping treat the over 400 million people worldwide who suffer from some 7,000 diseases that have no effective treatment — yet new drug development is becoming increasingly risky, costly and time consuming.

This is why drug repurposing – which seeks new efficacies among existing drugs – is gaining in popularity. Over the last 5 years, repurposed drugs have accounted for 45% of drug approvals in the U.S., generating some $500 billion in annual revenue.

It’s easy to see why. For one thing, repurposed drugs offer a lower risk approach, because of their known safety profile. What’s more, by seeking out drugs where human data exists for a new indication, EMBARK HEALTHCARE companies can further lessen the risks inherent in drug discovery.

It’s no wonder then that repurposing is gaining so much attention. EMBARK HEALTHCARE’s portfolio of companies are proud to be at the forefront of this transformation in drug development.

After we identify an asset and secure rights, we add intellectual property ⎯ such as reformulation and/or a distinct dosing regimen, plus seek to obtain regulatory exclusivities ⎯ such as Orphan Drug Designation for rare diseases or conditions.

Then, with the input from the best and brightest experts in each particular field, we conduct a proof-of-concept study to further de-risk the asset in order to make it as attractive as possible for big pharma to license or acquire.

As R&D budgets shrink (less than 50% of all new drug approvals stem from in-house R&D efforts), drugs go off patent, a drug’s life cycle ends, or where newer drugs create competitive pressures on sales and margins, big pharma is forced to turn to in-licensing or acquisition to fill the gap.

The pharmaceutical industry is still beleaguered by escalating costs, stagnant productivity and protracted timelines as it struggles to bring therapeutic drugs to market. This situation has been compounded by a ravenous generic drug sector.

…there is a morphing landscape dictated by more stringent regulatory oversight, demands for mechanism-of-action-based drug discovery and development and a patient population driven by the advent of personalized medicine and a consumer mentality. This has left the pharmaceutical sector scrambling for avenues of opportunity to minimize risk, reduce costs, and fill their pipelines with safe and efficacious candidate drugs.

Drug repurposing…is an attractive way to maximize return on prior and current preclinical and clinical investments in assets that were originally designed with different patient populations in mind.

HOW THE NUMBERS FOR REPURPOSING ADD UP

REPURPOSED DRUGS CAN COME FROM MANY SOURCES

There are a number of reasons that drugs become available for repurposing. It could be that the drug’s original patents expired. Maybe a better drug came to market for that indication and the company decided to shelf the program. Sometimes the company itself develops a next-generation drug and retires the older version. Or it could be that the discovery of the drug was for an indication that at the time didn’t provide enough financial incentive to be developed. Those are just a few of the reasons drugs become available for repurposing.

Sometimes a promising drug fails, only for investigators to discover its effectiveness in a different condition.

For example, sildenafil, developed for cardiovascular disease, failed in a clinical trial, but a side effect appeared that indicated the drug might treat erectile dysfunction, and thus the $2 billion-a-year blockbuster drug Viagra was born.

In the 1960s, AZT was originally developed to fight cancer, but it didn’t work. In the 1980s, after AIDS emerged as a new infectious disease, a pharmaceutical company began a massive study of potential agents. Among those tested was AZT, which blocked the virus’ activity. This “break-through” became the first live-saving FDA approved AIDS medication.

One of the most astonishing cases of a repurposed drug involves thalidomide. Originally approved in Europe in the 1950s, doctors were infamously prescribing it to prevent nausea in pregnant women. It was discovered to cause severe birth defects in new-borns and was withdrawn from the market. In 1998, thalidomide found a new use as a treatment for leprosy and in 2006 it was approved for multiple myeloma, a bone marrow cancer.

With 30,000+ approved drugs and more either discontinued or abandoned for one reason or another, there’s a rich pool of potential compounds for repurposing. 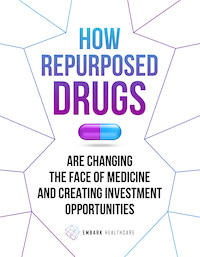